Thank you for opening my blog


The blog I’m about to write might be a somewhat sad one, so for those of you who can’t hear something like that right now, I’d be happy if you could open my blog another time!


Alright, let’s get right to it

On August 11th, 2022, my beloved dog Meru-chan, who was being kept at my parents house, crossed over to the Rainbow Bridge 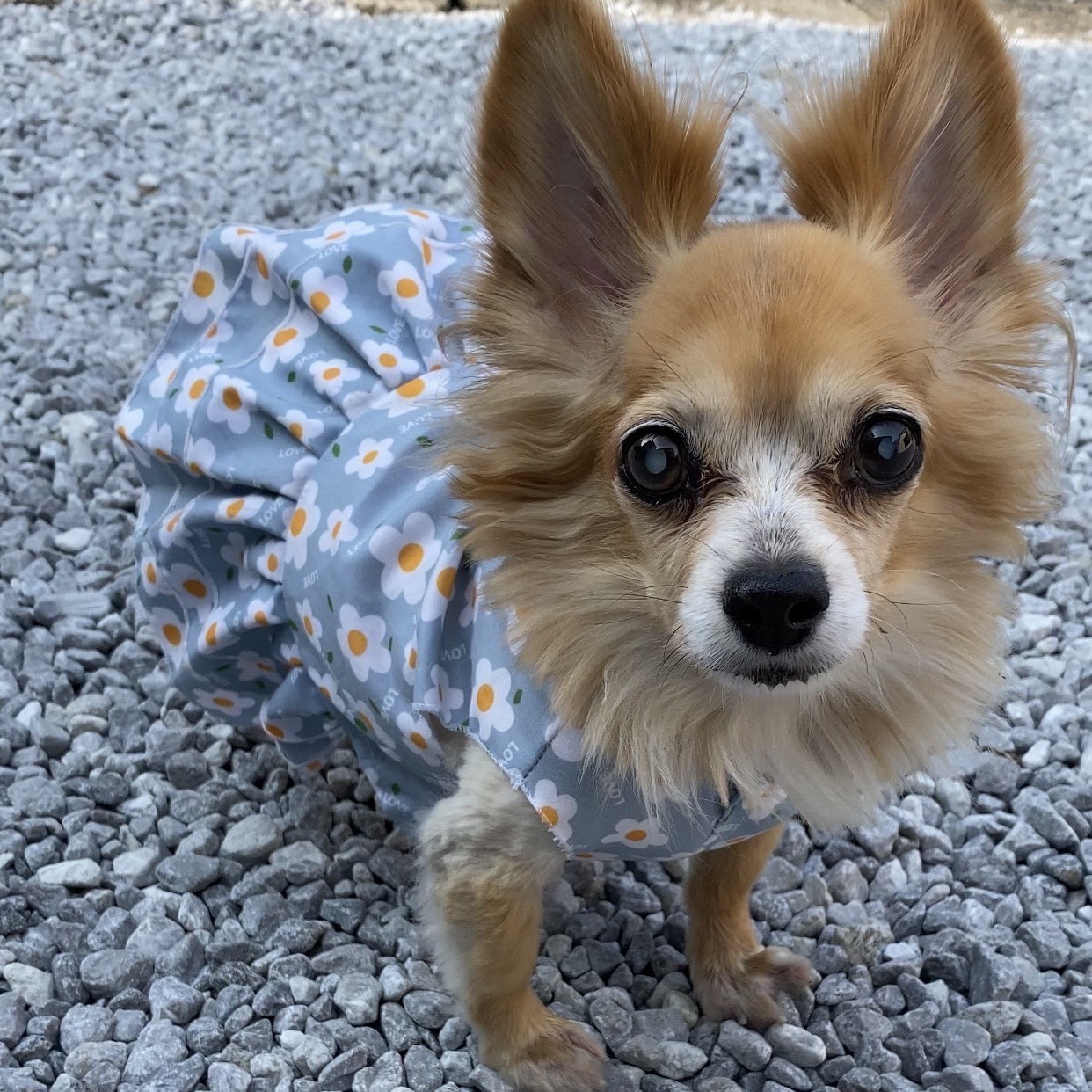 I wasn’t sure if it was entirely necessary to write a blog about this, but I thought since there might be some of you who know about Meru-chan, I decided to let you all know here. 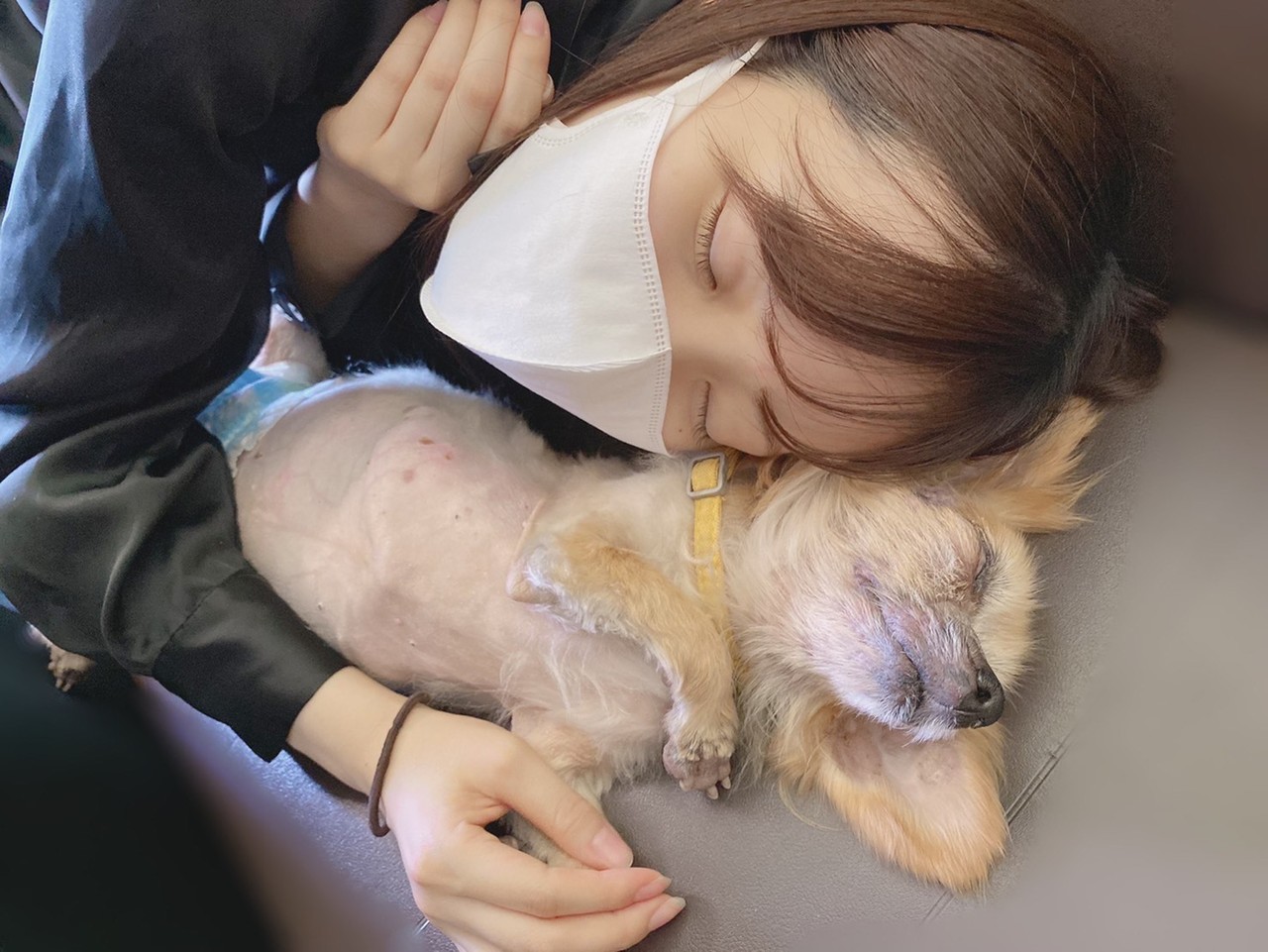 My family called to let me know that she might not have much longer, so I went there on my day off and got to spend a little bit of time with her!


Honestly, she’s been in poor health since about 2 years ago as she developed diabetes and cataracts. 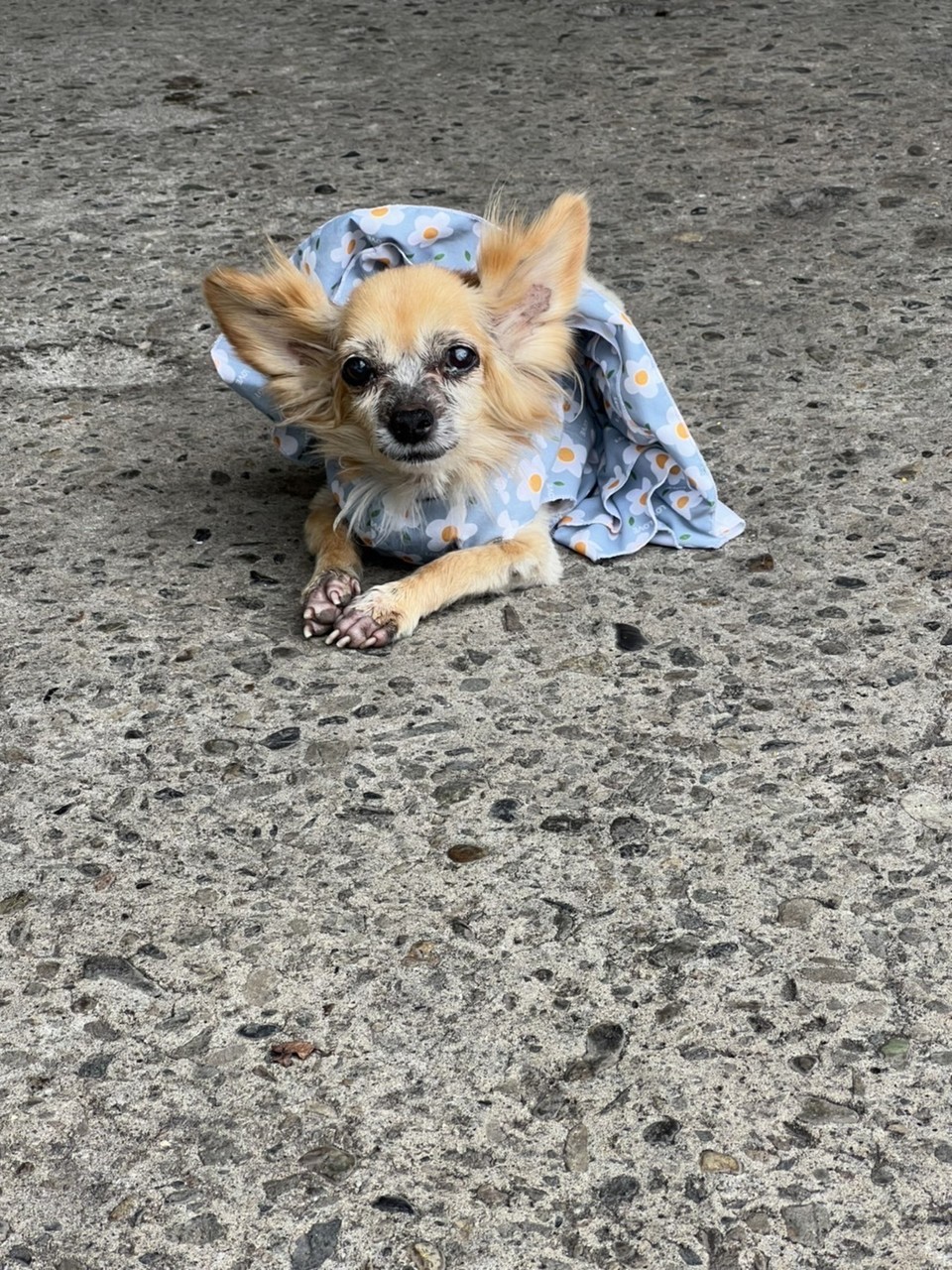 Still, for these last 2 years, she’s looked as energetic as ever!


Though I wasn’t able to take care of her myself, I was able to see Meru-chan in her final moments over the phone


At the end, she tried to show us how well she was doing, and although she was lying down for most of the day, she kept on doing her best to try to show us she was okay by trying to sit up


At the time, I couldn’t figure out why she kept trying to sit up, but later I realized that’s what it was. That’s so like Meru-chan! 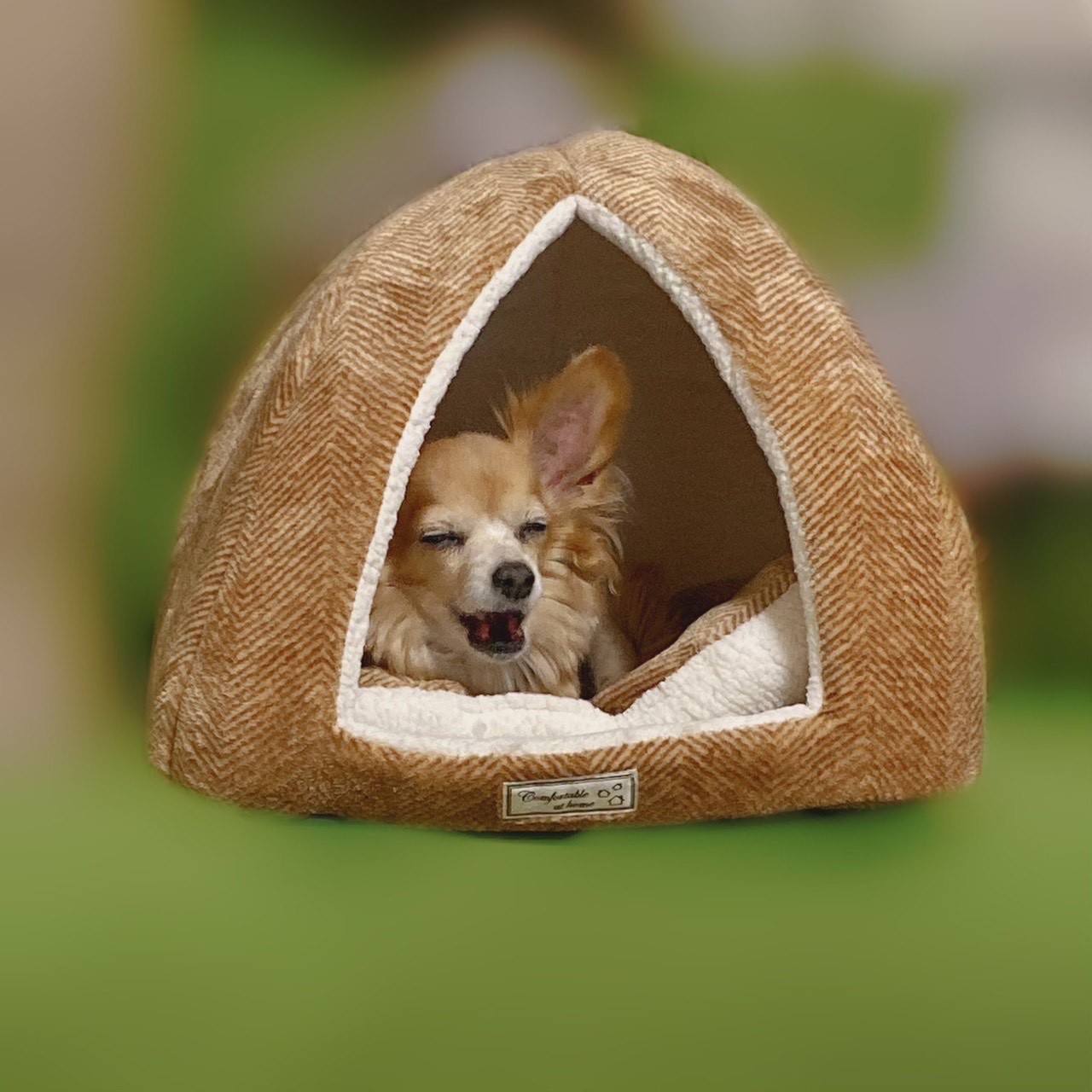 Meru-chan was smart, somewhat strong willed, the most adorable, beautiful girl in the world who loved to be called “cute” and “good girl.”

When I was in elementary school, I was always saying how much I wanted a dog, and around that time an acquaintance of ours happened to just have a litter of puppies been born, so we adopted one and that’s how I met Meru-chan 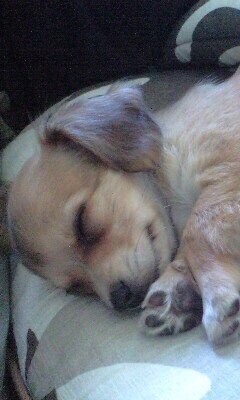 That’s Meru-chan!
When she was a puppy her ears were down🙂so cute


When Meru-chan first came to our house, I was over a friend’s place. I can remember running all the way home to see her!


We had all thought up names for her, but when I said “Meru-chan!” everyone agreed to it!


I’m the one who gave Meru-chan her name😎 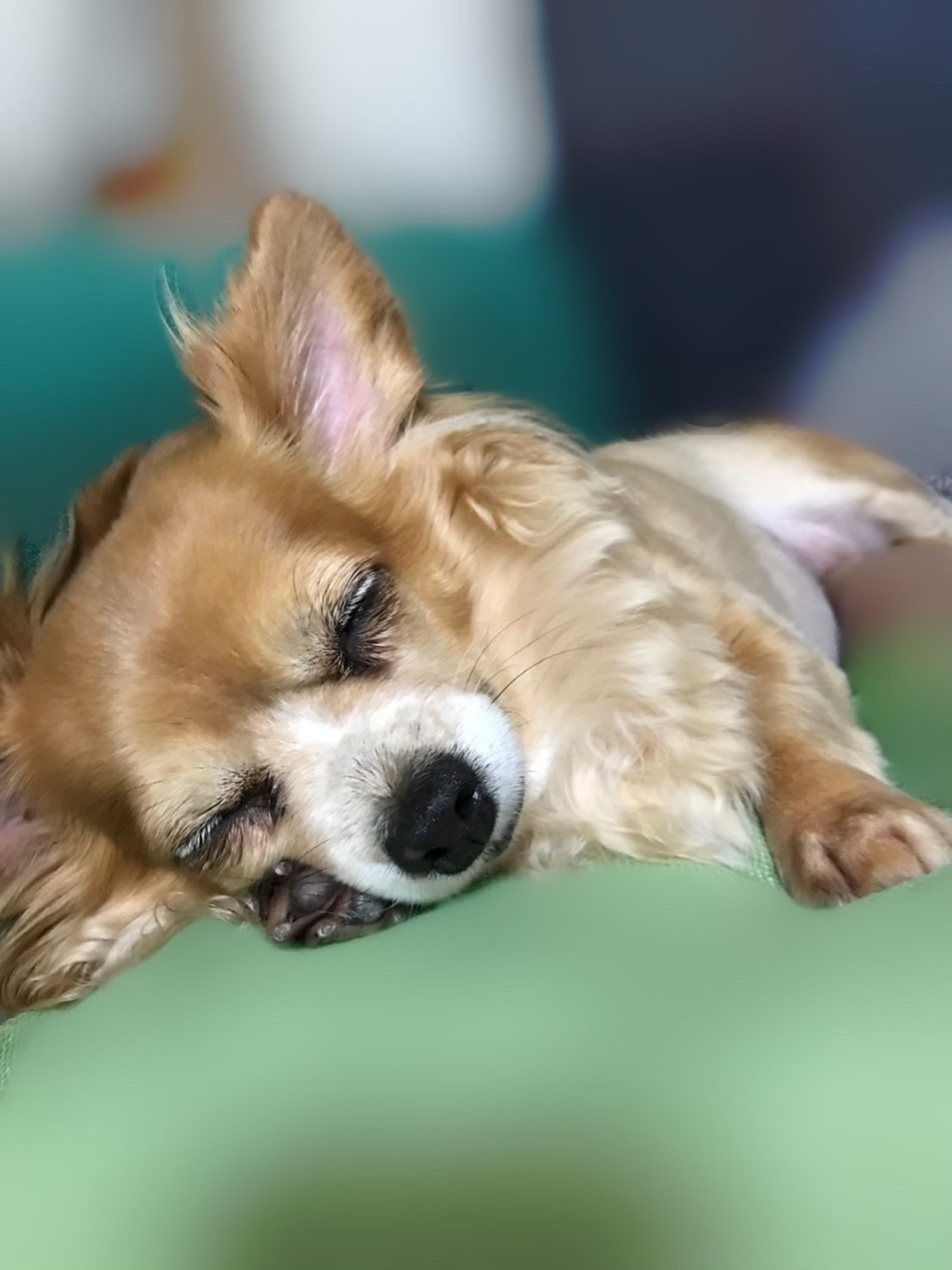 Meru-chan was a skilled performer, we could tell her“shake,” “now with the other paw,” “high five,” “sit,” and when we’d say “Bang!👉” she’d roll over and show her belly. She’d put her paws up when we called her name, and she’d do a begging gesture when we had food for her and said “Wanna eat??” 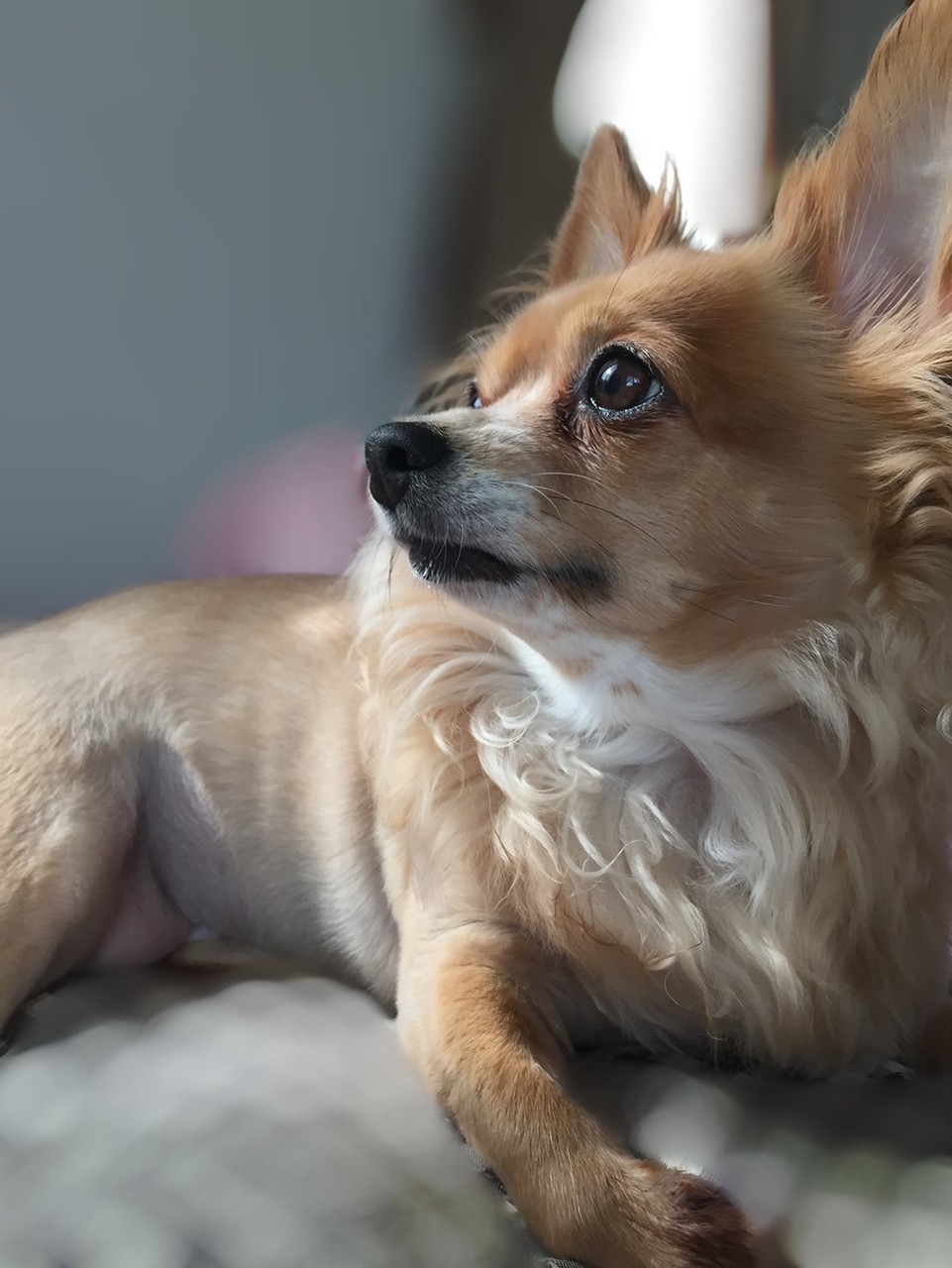 We’d play hide and seek too!


I’d hide somewhere in my room, and when my family would go “Where’s Rina～?” Meru-chan would run in and look all over my room for me!

She was a genius dog who could play the demon role in hide and seek🐶 (tln: “it” or seeker)

After coming to Tokyo, I couldn’t see her much anymore and I missed her tremendously, but I was grateful that she’d still be so delighted to see me whenever I came home! 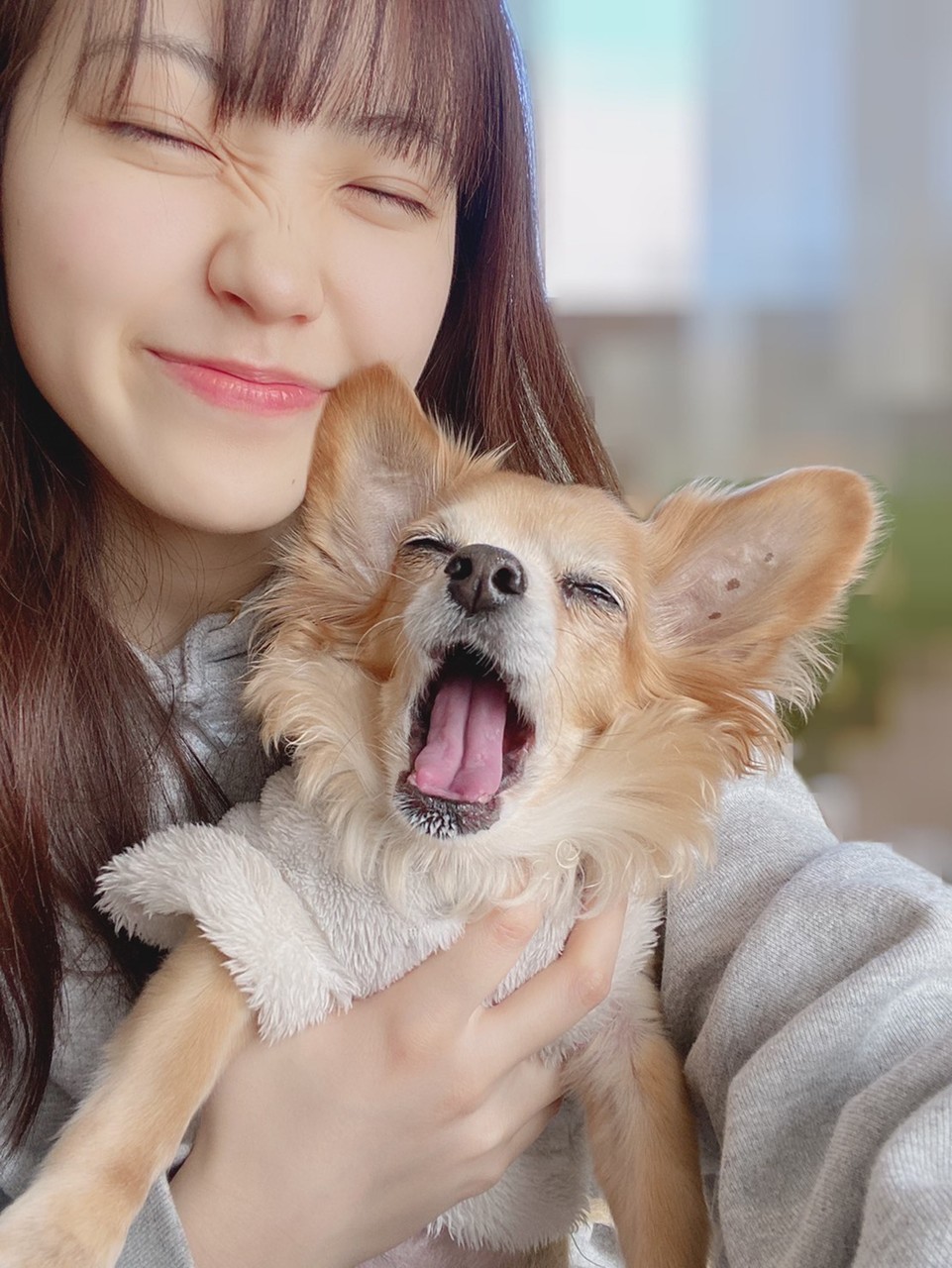 It’d make me so happy that even though she was blind, she’d know it was me and get excited! That’s Meru for you!


And actually, around the time when Meru-chan became ill, a stray cat started showing up around my father’s job. He couldn’t find the owner or anyone else to take care of it, so it came to live at our house, so Meru-chan had a cat to live together with!

On days Meru-chan wasn’t feeling well, they’d snuggle up together! 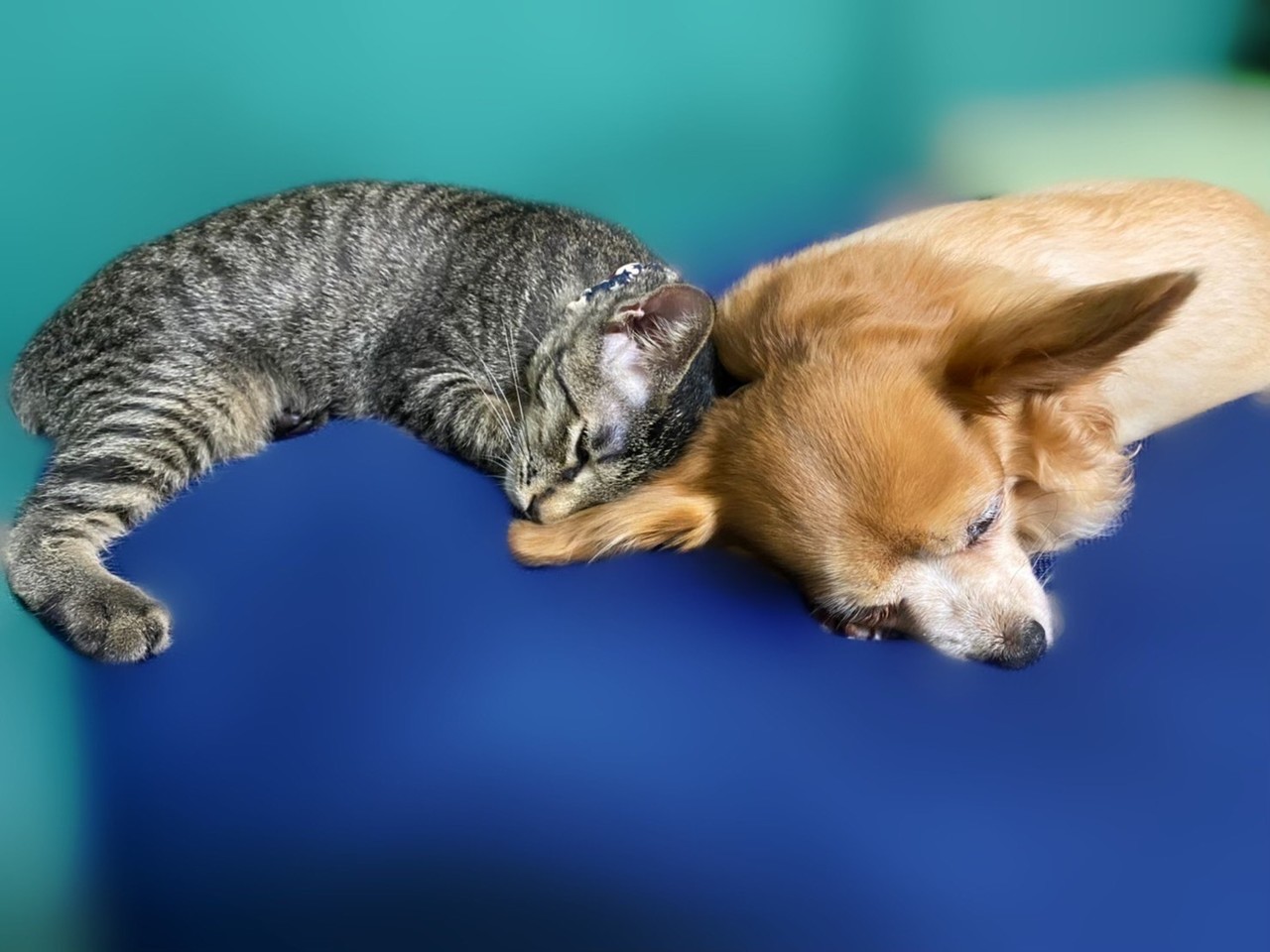 Meru-chan would get angry whenever Popo messed around with her, but on this day she wasn’t angry and they slept next to each other😪 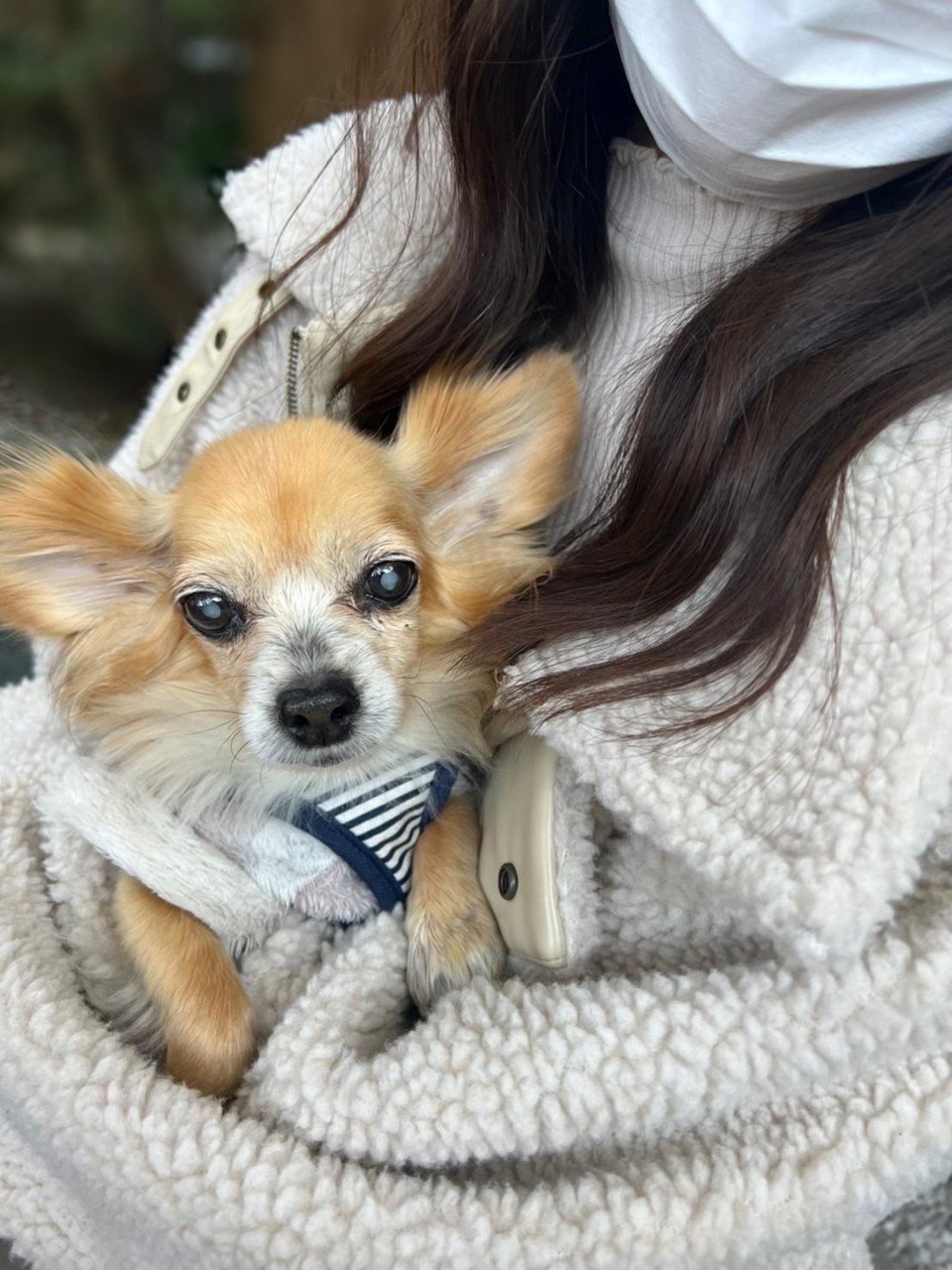 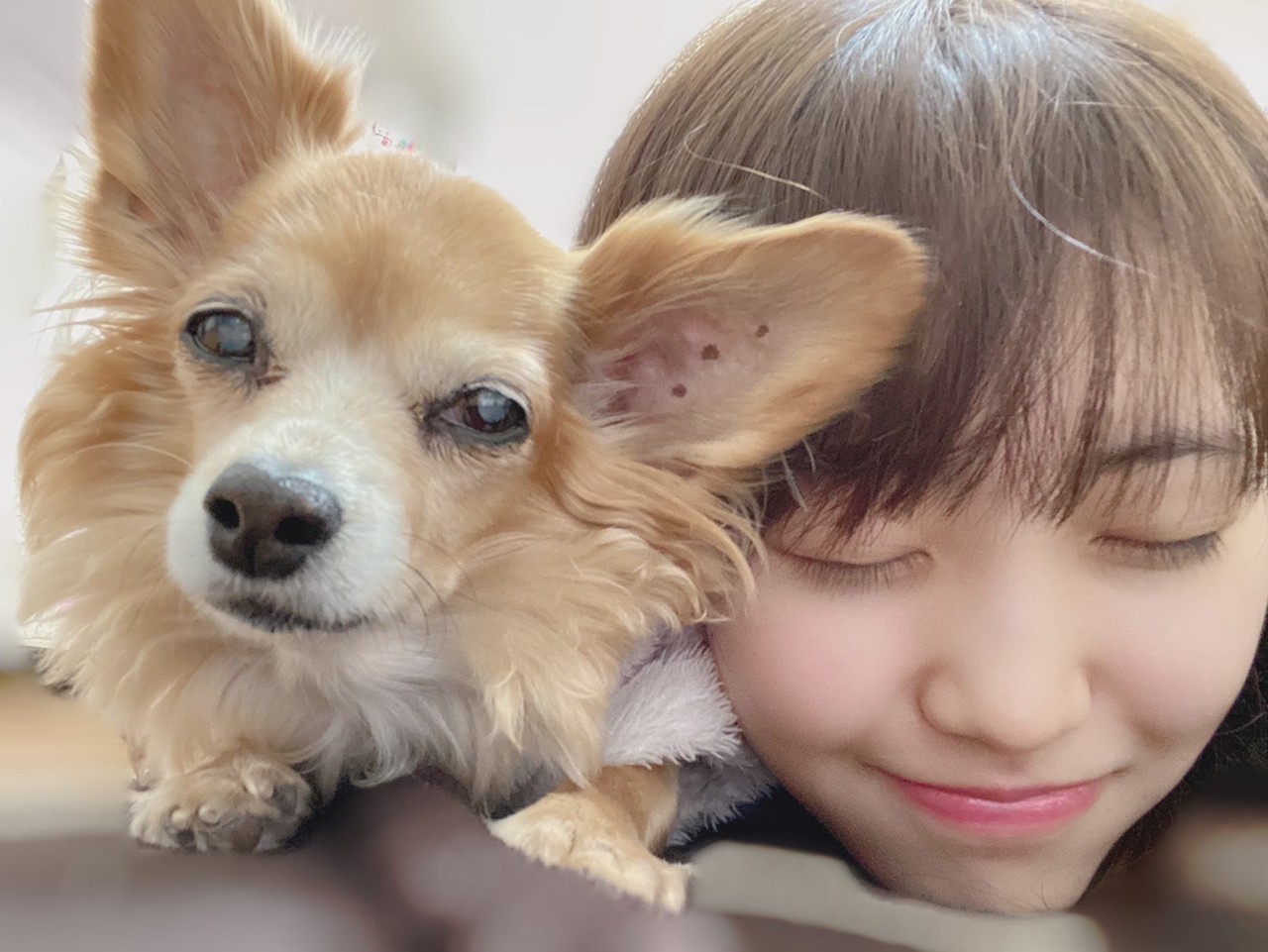 I have countless memories with Meru-chan, and since meeting her, she has given me so many memories, so many smiles, and so much happiness!


I have so many precious memories with her!


Meru-chan was both family and a close friend!

I had a lot of gratitude to convey, a lot of things I wanted to express to her, and I made sure to let her know all of it!

I’m so truly happy I was able to meet you, Meru-chan!

Thank you Meru-chan!! I’ll love you forever & ever!! 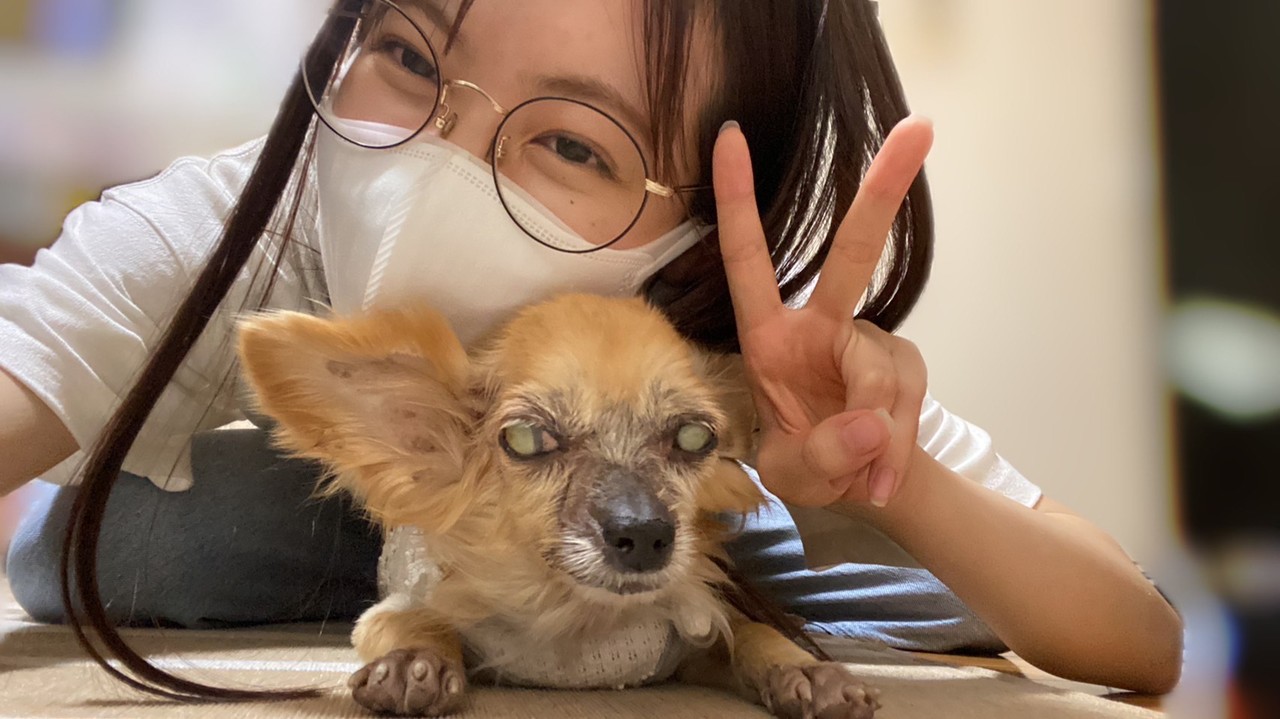 Thank you for reading my blog.